Reimage: is it worth it?

Published by Giedrius Majauskas on October 25, 2010

Reimage is a automated registry and PC repair tool. It is similar to Registry cleaners, though it claims that it works differently, by performing deeper analysis of  PC health and having a configuration and file repository, which allows reversing of damage done to PC (aka deleted files/drivers/etc).

The controversy with reimage is that it is relatively costly. Also, It had some unfavourable reviews (by Steven Burns, whom I highly respect, on WOT forums). However, more than half a year have passed, and they have claimed that Reimage was heavily improved. Also, they have contacted me as the owner of 2-viruses.com for promoting it. So, I have decided to test it on one of our testbeds.

First of all, the install procedure is really 2-fold: you download small installer, it downloads remaining program. Such installers are easier to distribute for the owner, but have important drawback for fixing heavily-corrupted PC: you can not install program without internet easily. And fixing internet connection is one of the most important tasks for such tools. 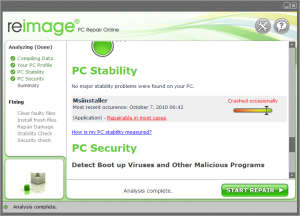 The interface looks nice, and I have not noticed excessive scaring like Steven  described in former version. However, lots of things are for show only: The nice bars for showing your hardware properties compared to average, etc. All the information was displayed minutes before the bars in text format already. Also, the results are not accurate. For example, the 3-5 years old 2.5Ghz celeron has “average” computer speed.

In the end, it suggests to fix that particular problem. 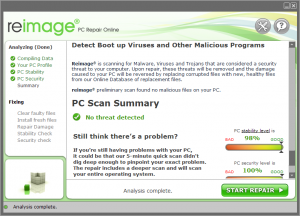 After clicking that button, you are required to enter your email and forwarded to a webpage where you are asked to pay 50 E for fixing microsoft installer problems, where fix is far for guaranteed (it depends on programs which caused the installer to crash). That is a bit too much for my taste 🙂 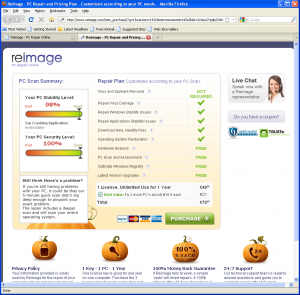 Overall, I can not recommend Reimage for now, even if it might be good and useful couple years in the future.