Surprised: Malware makers do not test their software properly

Published by Giedrius Majauskas on June 29, 2012

Malware makers mess up too.

Today I was checking out which version of Fake Vimes parasiteis promoted. Usually, the change occurs later on, but it is always worth a check. To my surprise, I was greeted with an error message : 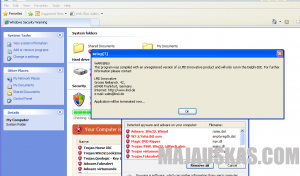 It looks like Fake Vimes makers haven’t paid for their software license and got caught in the process. What is funnier, they haven’t checked their malware properly once released. Thus we will have couple safer hours till the malware will get recompiled again. Well, except if they will go on holidays for the summer.

The bad news is that this is not the only malware family active today. Visiting similar pages might redirect you to BlackHole or other exploit kit that installs malware like banking trojans, rootkits or other rogues directly. So stay alert and have a good antivirus ready.